Public-key cryptography, or asymmetric cryptography, is a cryptographic system that uses pairs of keys: public keys, (which may be public to widely) , and private keys, (which will be known only to the owner.) The generation of such keys depends on cryptographic algorithms based on mathematical problems to produce one-way functions. In such a system, any person can encrypt a message using the receiver's public key, but that encrypted message can only be decrypted with the receiver's private key.

This has the advantage of not having to manually pre-share symmetric keys, while also gaining the higher data throughput advantage of symmetric-key cryptography over asymmetric key cryptography. With public-key cryptography, robust authentication is also possible. A sender can combine a message with a private key to create a short digital signature on the message. Anyone with the sender's corresponding public key can combine the same message and the supposed digital signature associated with it to verify whether the signature was valid, i.e. made by the owner of the corresponding private key

Use of public key algorithm to provide confidentiality 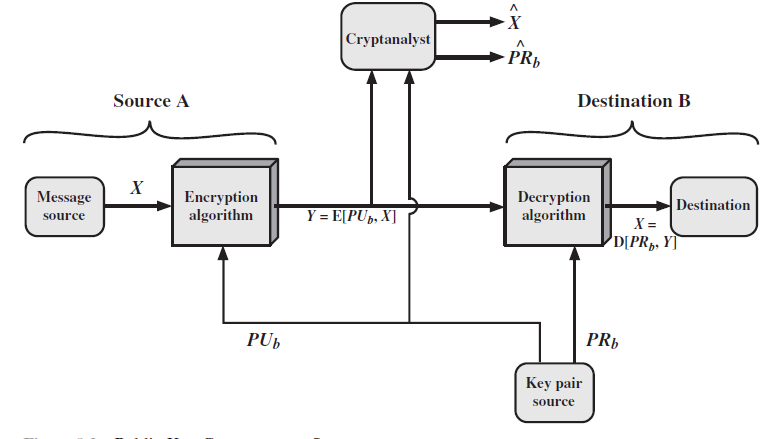 When Alice wants to send a message to Bob maintaining confidentiality:

key pair of receiver is used

2. Use of public key algorithm to provide authentication

3.to provide both the authentication function and confidentiality

What is Cipher Feed Back mode (CFB)?